I was afraid when I first walked into CrossFit. It was a big warehouse-looking place with lots of equipment I was not used to. I was intimidated and almost walked out. I am glad I didn’t.

I said to myself, “I will give this 30 days.” It has been over three years.

The workouts are different and that is ok. Sometimes I think the exercises are a little bit crazy, but what is so bad about crazy? What I have gained from CrossFit is amazing: a stronger body and a belief that I can do things I thought I could not do previously. I have gained close friends and support from people I can call family.

CrossFit is a way of life that has transformed my life. I am a better person because of Mariana and the folks at CrossFit Kryptonite. I highly recommend their services. 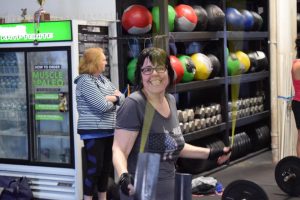 I played football in college and got as big as 260 pounds. When I was done playing, I dropped some weight but fluctuated from 240 pounds to 250 pounds. I was overweight and not taking care of myself. In 2014, I started my CrossFit journey at another box near my job. I always wanted to try it but never had the confidence to do it. I was a college athlete who had let himself go and couldn’t do the physical things I was used to doing. It was embarrassing. As soon as I started, I fell in love with CrossFit. I went everyday for a year and saw massive improvements. I got my weight down to 200 pounds and was improving my strength and skills.

Then, I was laid off from my job and stopped going. I was burned out; I didn’t feel like going to the box anymore and being critiqued about my form or the weight I was attempting. I gained 20 pounds before I made myself go back, and I chose CrossFit Kryptonite because it was close to home and easier for me to attend classes on a daily basis.

When I entered Kryptonite, I could tell I had made the right decision. It was night and day compared to the other box I was affiliated with. The atmosphere was better, and everyone was welcoming to the new guy in the gym. I was excited again about improving my health.

The first day I was there, we had to squat for our strength phase of the workout, and Mariana told me, “Very nice.” It was the first time I had ever been given a compliment while in a CrossFit gym. I was used to being yelled at about my form, and now the owner of the gym told me I was doing a good job. That motivated me to work harder.

CrossFit Kryptonite has done a lot for me. It has given me the opportunity to fall in love with CrossFit again. Most importantly, it has allowed me to take back my health and be the best version of myself I can be for my wife and two kids. I can’t thank Mariana and the Kryptonite family enough for accepting me into their family and helping me return to my journey of healthy living.

I got started with CrossFit when I participated in the six-week challenge. After not exercising regularly for over 10 years and having hit mid forties, my body was rapidly changing for the worse. None of my clothes fit and my self esteem was plummeting. I knew I needed to do something! I saw the ad for the six week challenge on Facebook and decided to just dive in.

I was nervous, scared, anxious, and excited all at the same time. I’ll admit, the only thing I enjoyed in the beginning was the results from eating Paleo. During the first several classes, I felt weak and uncoordinated…something I was not used to feeling. I got so down on myself and told myself I’ll just finish out the six weeks and I’m out of here! But by week four, something clicked. I really started to feel stronger. My coordination and balance were building. The camaraderie among the other challengers in my class and the encouragement from Mariana and the other coaches kept me going. I realized that I could do this! I wanted to do this! I was hooked!

It’s been almost a year now and I can’t imagine ever stopping. I still have many strength goals I want to reach. I thrive on knowing that each class is going to kick my ass, and that it’s going to make me stronger. CrossFit Kryptonite and Paleo have been life changing for me!!!

Before I started the six week challenge at CrossFit Kryptonite, I was the heaviest I have been in my life and struggling with postpartum depression.  I decided to sign up for a 6 week challenge to help ease me back into working out and it was the best thing I could have done. I went from wanting to sleep all day to looking forward to getting up early and getting my day started in the gym. It helped me over come the struggles of postpartum depression and made me feel like a better mom to my son. I learned more than just working out. I learned to really focus on what I was putting into my body. It was an environment that kept me accountable for my actions, which is what I need. I am excited about my journey. The challenge was just the beginning of my new lifestyle change.